Toyota Motor Corporation, or simply called Toyota, is a Japanese multinational corporation and the world’s second largest automaker, making automobiles, trucks, buses and robots. It is the world’s eighth largest company by revenue.

The headquarters of Toyota is located in Toyota, Aichi, Japan. Its subsidiary, Toyota Financial Services sells financing and participates in other lines of business. Toyota brands include Scion and Lexus and the corporation is part of the Toyota Group. Toyota also owns majority stakes in Daihatsu and Hino, and 8.7% of Fuji Heavy Industries, which manufactures Subaru vehicles. They also acquired 5.9% of Isuzu Motors Ltd. on November 7, 2006 and will be introducing Isuzu diesel technology into their products.

The Toyota Motor Corporation was founded in September 1933 when Toyoda Automatic Loom created a new division devoted to the production of automobiles under the direction of the founder’s son, Kiichiro Toyoda. Soon thereafter, the division produced its first Type A Engine in 1934, which was used in the first Model A1 passenger car in May 1935 and the G1 truck in August 1935. Production of the Model AA passenger car started in 1936. Early vehicles bear a striking resemblance to the Dodge Power Wagon and Chevrolet, with some parts actually interchanging with their American originals.

Although the Toyota Group is best known today for its cars, it is still in the textile business and still makes automatic looms, which are now fully computerized, and electric sewing machines which are available worldwide.

Here at SC Motors we have a wide range of new and used Cyprus Toyota cars for sale including Auris, Rav4, Hilux, Land Cruiser, Prado and many more. Our stock is changing on a regular basis due to the demand for Cyprus Toyota Cars. 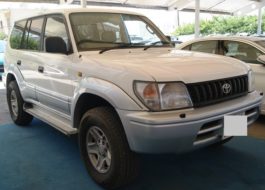